“THE SKILLS I LEARNT THROUGH E.S.L.F. IS ALREADY HELPING ME FINANCIALLY…I USED TO SUFFER LOW SELF ESTEEM BUT THE MENTORING I GOT HERE CHANGED ALL THAT”, QUEEN IORPUU AFFIRMED!

In 2017, Queen Iorpuu passed out with flying colours from secondary school but, bogged down by financial constraints, she has been unable to proceed to an institution of higher learning to further her education. Therefore when she overhead some girls talking some weeks ago about the ESLF skills acquisition training under UNFPA’s Safe Spaces Management Project at Ugba in Logo L.G.A. of Benue State, she instantly saw the chance to do something meaningful with her life. Of course, without hesitation, she grabbed the chance with both hands and enrolled. During the interview, Queen confidently declared: “Now I can bake cake, make liquid soap, vaseline, perfume, chin-chin and so many other things”!

Asked if the programme had been of any benefit to her so far, she was quick to admit that: “Financially, it is helping me a lot already. I bought chemicals for making vaseline and containers for N2000, then produced and packaged the Vaseline which I sold for N3500. That means I made a profit of N1500 for my effort”!

Having raked in almost a hundred percent profit from her Vaseline production, Queen feels elated and highly motivated about the venture. She expressed confidence that she could make more money if only she could get some assistance to scale up her production.

Simply listening to Queen speak, you cannot help but get struck with the conviction that she has got great plans to build a business empire out of her newfound knowledge: “After this graduation, I will do a proper launching. Then I will lay out my plans not only to increase production but also formally present myself as a trainer in skills acquisition.”

Perhaps her conviction to become a professional trainer came from the opportunity that trailed her right to the spot where she was selling her product.

According to her,
“One of the customers who bought the Vaseline saw that it was good so he asked me if I actually produced it myself. I told him, ‘Yes, I did’! So immediately he contracted me to come and teach the girls at his church at an agreed fee. I later went and trained the girls at the Redeemed Christian Church of God at Tyowanye which is in Buruku Local Government Area.” 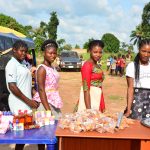 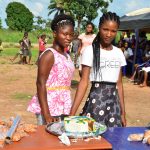 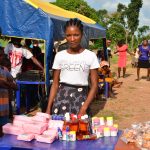 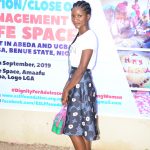 Before now a small time trader in shea butter, shower caps and other small items, this enterprising young lady said she had only come to Ugba to help her mother at the farm when she heard about the skills acquisition training and then went for it.

Like a hungry predator keen on conquering its prey, this self-motivated Queen is poised to conquer her world as she hungrily follows available opportunities with the precision of a sniffer dog on the trail of a suspicious scent.

Queen seems all set to rule her world of business in times to come and with just a little more nudge in terms of capacity building and financial enablement; her business kingdom would, no doubt, begin to conquer several frontiers, become strongly established and flourish well in no distant time!