“IN FUTURE, I’LL LIKE TO BE A NURSE…WITH THE ESLF TRAINING, I CAN NOW WORK AND HELP MY FATHER TO RAISE MY SCHOOL FEES” SAYS 13-YEAR-OLD MIMI MSUGHTER.

“This training is very good and I learnt a lot from it. In fact, I am very, very happy self because after the training, I was able to make some chin-chin which I sold in my school during break period and at Ugba Market. I then used the gain I made to buy my school books”!

This was the profound response by an overly excited Mimidoo Msughter, a 13-year-old resident of Ugba Town in Logo Local Government Area of Benue State when asked how she felt about the training she underwent at the E.S.L.F-implemented programme on mentoring, vocational skills training and psychosocial support under the UNFPA-sponsored Safe Spaces Management Project at Abeda/Ugba and Anyiin.

Mimi (as she is fondly called), is a brilliant and quite confident J.S. 2 student of God’s Time Secondary School, Ugba and lives with her parents who are both peasant farmers. She admitted that the training impacted her life so much that she was still counting the gains.

According to her, the opportunity to be trained suddenly came one fateful day when she was surprisingly asked alongside few other female students to come out in front of others. Filled with apprehension, she initially thought they had been singled out to go and do some tedious work somewhere. Instead, she said they were led to the Safe Spaces Centre which is just a stone throw from her school. “There we were told about the skills acquisition training and my heart was filled with joy as the facilitator explained what we were there to learn.” 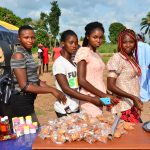 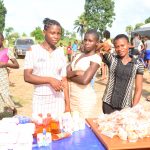 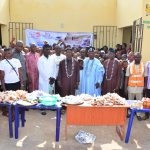 Mimi disclosed how terrible she once felt when her father could not pay her school fees one certain term, asserting that if she had acquired these skills at that time, she would have been in the position to produce something to sell and raise her fees.

“But now that I have learnt these skills, I can be doing it to buy some little, little things for myself. I can even help my father to raise and pay my school fees”!

Lamenting the fact that she is constrained by finances and can neither produce some of the things she had learnt nor produce enough quantity of the one she could produce, she expressed hope that she could get some funding to support her effort.

Mimi also explained how the mentoring sessions on self esteem, personal hygiene and resilience skills helped to build her up as an individual:  “Before now I used to talk to people anyhow but after this training, I now have more respect for other people.” Unlike before, Mimi said she now gives listening ears to others whether or not she agrees with their point of view.

She expressed profound appreciation to ESLF and UNFPA and urged them to extend the training to others as well.

Mimi, who brimmed with so much optimism, expressed hope that with some support, the vocational skills she had acquired through ESLF and UNFPA could help her achieve her ambition to become a qualified nurse in future.